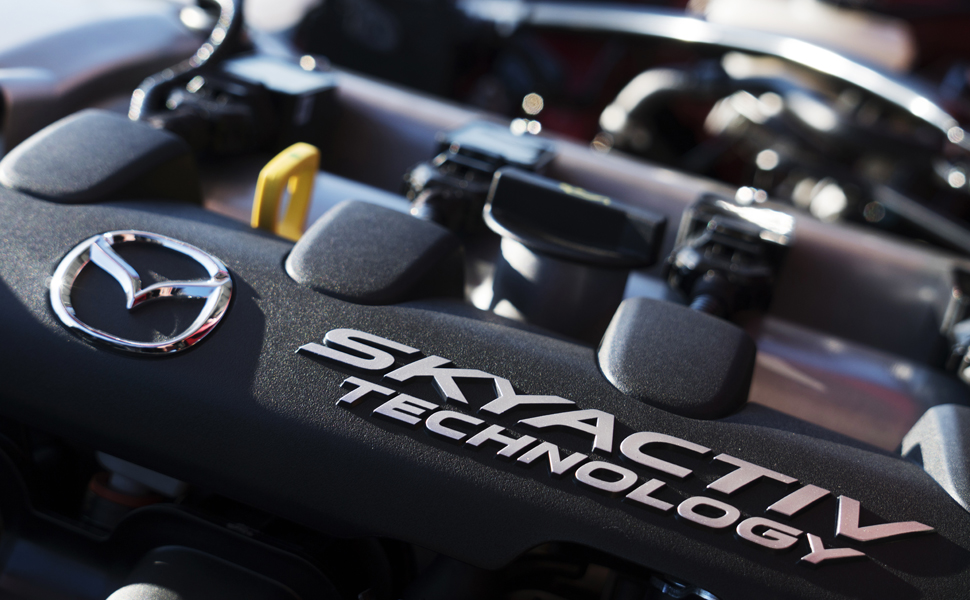 From the launch of the original MX-5 in 1989, Mazda’s biggest-selling sports car has delivered the right balance between power and weight.

From the launch of the original MX-5 in 1989, Mazda’s biggest-selling sports car has delivered the right balance between power and weight. It’s never been a car that chased outright performance at the expense of affordability and handling balance. Through all three-generations, the MX-5’s engines have complimented the chassis with a positive throttle response and an eager to rev character.

Thanks to bespoke versions of Mazda’s petrol SKYACTIV-G powertrains, these winning ingredients are more clearly displayed than ever before. Customers in the UK can choose between two proven normally aspirated direct-injection engines – the 1.5-litre SKYACTIV-G or the 2.0-litre SKYACTIV-G, both mated to Mazda’s crisp shifting SKYACTIV-MT six-speed manual gearbox, which has been adapted for the MX-5’s classic front mid-engine, rear-wheel drive layout, while exclusive to the Retractable Fastback, the £27,595 Sport Nav Auto model brings an automatic option to the current generation of MX-5 for the first time.

However, while both engines share much with the versions found in other new-generation Mazdas, including piston cavities, high tumble ports, multi-hole injectors, duel sequential valve timing and other efficiency enhancing features, many components were modified for the MX-5’s layout, size and performance criteria.

In fact most of the components of the smaller 1.5-litre SKYACTIV-G were modified for the MX-5’s requirements of increased output, reduced weight and improved packaging. To ensure the 1.5-litre engine delivers the precise and immediate throttle response expected by sports car owners, Mazda’s engineers changed the cam timing and rotating parts to raise the redline to 7,000rpm, adding a custom steel crankshaft to support the revised engine’s higher and free-revving nature. With a 131ps output - compared with a 120ps maximum output in the Mazda3 - the MX-5 version of the 1.5-litre SKYACTIV-G also has more power. Even better, there’s more power than the previous generation 126ps MZR 1.8-litre MX-5, with significantly better fuel economy and emissions.

The 2.0-litre SKYACTIV-G has been tuned for extra low and mid-range torque, delivering 160ps at 6,000rpm and peak torque of 200Nm at 4,600rpm. Compared to last-generation 2.0-litre MZR MX-5 acceleration has been enhanced while again emissions and fuel economy have been significantly improved. To maximise the fun factor, both engines feature lighter and more compact intake and exhaust systems to allow the engines to reach their full potential. The intake system, which weighs 30 per cent less than the previous MX-5, significantly reduces airflow resistance while cleverly removing exhaust heat to maintain intake efficiency.

Weight savings extend to the engine blocks themselves, which are lighter than the outgoing 2.0-litre MZR engine. The SKYACTIV-G 2.0 is 8kg lighter, while the smaller 1.5-litre engine is 14kg lighter. Both the engines in the Mazda MX-5 RF feature attractive die-cast aluminium head covers that are reminiscent of the original MX-5 and weigh the same as a plastic cover.

Another example of the all-encompassing focus of Mazda’s engineers is the radiator, which is smaller and lighter, and now features air ducts and flaps to regulate air pressure from the fan to enhance cooling efficiency. And as one of several measures to optimise weight distribution within the engine compartment, the radiator is repositioned closer to the car’s centre of gravity. In addition, Mazda’s 4-2-1 exhaust manifold is a SKYACTIV mainstay feature that has been redesigned for the MX-5’s rear-wheel-drive layout and tuned to deliver a pleasing exhaust note, at the same time as maintaining its core efficiency benefits.

The Mazda MX-5 RF also enjoys the perfect transmission – the much celebrated SKYACTIV-MT six-speed manual. When experienced in other Mazda models this gearbox has won praise from customers and journalists alike for its ‘MX-5 like’ shifting action. Now thanks to a version of the SKYACTIV-MT unit specially developed for the MX-5, things have come full circle. Modified to take into account the MX-5’s front mid-engine, rear drive layout, changes include a simplified linkage to reduce sliding resistance in the gearbox without undermining the crisp shift action. The end result is the same 40mm shift stroke action common to the MX-5 since day one and a smooth, slick and light gear change that seems to draw the lever into the right position. Even better, the SKYACTIV-MT is 7kg lighter than the six-speed gearbox in the third-generation MX-5.

Other transmission highlights include a direct-drive sixth gear that lowers the final gear ratio to raise real-world fuel economy by reducing resistance. The Mazda MX-5 also has a lighter ultra-compact limited-slip differential, which reduces energy loss by about one quarter relative to the outgoing car. With bespoke engines and a tailored transmission, the Mazda MX-5 uses Mazda’s award-winning SKYACTIV technology to deliver a benchmark sports car drivetrain that stays true to the MX-5’s mechanical heritage.