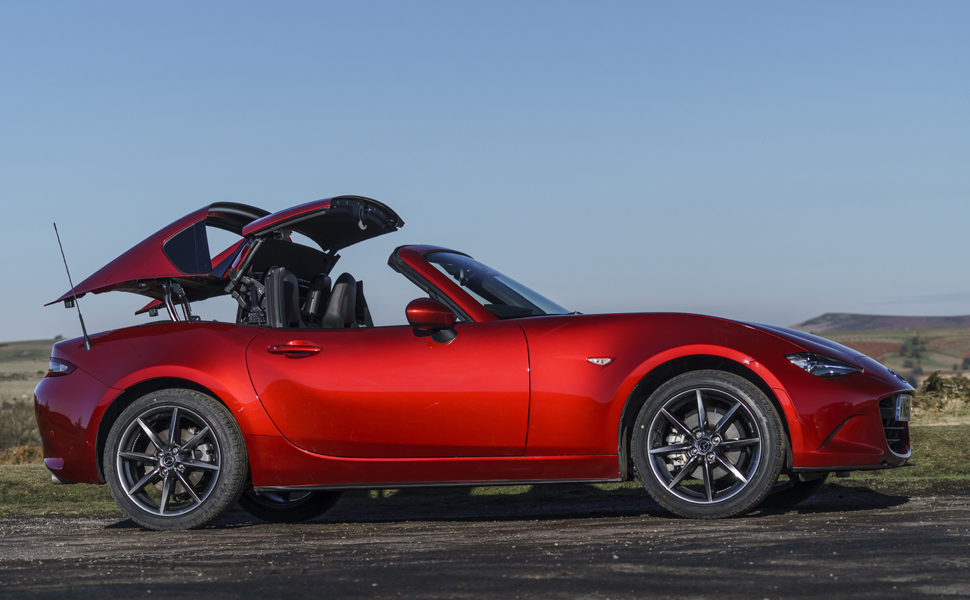 Click on the hotspots to see more information on the Mazda MX-5 RF's technical features.

Carried over unchanged from the MX-5 convertible, Mazda’s efficient SKYACTIV-G petrol engines are enhanced for use in the MX-5. Lighter and more compact intake and exhaust systems deliver heightened performance and enhanced sounds. With revised cam timing and a custom steel crankshaft, the 1.5-litre 131ps SKYACTIV-G’s redline is raised to 7,000rpm and power output is improved over versions used in the Mazda2 and Mazda3. This engine offers a higher output than the Mk3 1.8-litre MX-5 at the same time as delivering far better fuel economy and lower emissions.

Specifically tuned for wider low and mid-range torque the 160ps 2.0-litre SKYACTIV-G engine is 8kg lighter than the outgoing MX-5 RHT’s MZR 2.0-litre engine. It also delivers more torque, quicker acceleration and far better fuel economy. As with the 1.5-litre engine, the 2.0-litre features lighter and more compact intake and exhaust systems, a dedicated lightweight flywheel, plus a lighter crankshaft and pistons. Both engines also feature an attractive and thin die-cast aluminium engine cover that weighs the same as a plastic cover but is visually reminiscent of early MX-5s.

Adapted for front engine, rear drive layout Mazda’s highly-praised SKYACTIV-MT six-speed manual plays a huge part in the MX-5’s driver appeal. It maintains the same sporty 40mm shift stroke as previous MX-5’s, yet the SKYACTIV-MT is 7kg lighter than the six-speed unit in the Mk3 MX-5. The rear differential is lighter and smaller than the outgoing car, while clutch pedal weighting and movement has been honed for an even better driver experience. Even better, for the first time in this generation of MX-5, there’s the option of an automatic gearbox – matched to the 2.0-litre 160ps Sport Nav, the six-speed auto features direct shifting with lock-up control from third, plus has a Drive Selection switch for sportier shifts at the touch of a button.

All versions of the MX-5 feature a space-saving duel-pinion electric power assist steering system designed to deliver direct feedback and feel, Mazda’s engineers placed the steering system closer to the front wheels and ensured stiffness below the steering column with the overall result being lighter, faster and more precise steering. Fine tuning of the steering set up specifically for the RF ensures that linearity and feedback has been refined to match the unique dynamic feel and balance of the Mazda MX-5 RF.

Retaining the same award-winning chassis as the MX-5 convertible, the RF’s suspension, steering and brakes have been specifically tuned to deliver a more sophisticated driving experience, while at the same time retaining the MX-5’s famed agility and driver engagement. A revised underbody cross member ensures front-to-rear stiffness is balanced to match the effect of the fixed roof, while optimised engine mounts and reinforced rear suspension towers further hone the chassis set-up. With additional weight over the convertible being just 40kg on the 1.5 RF and 45kg on the 2.0 RF, the Mazda MX-5 RF also retains Mazda famed focus on lightness.

Back to top of page